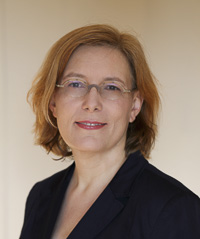 Elisabeth Conradi is Professor of Philosophy and Social Theory and faculty member of the Baden-Württemberg Cooperative State University Stuttgart (DHBW), Germany. She is further affiliated to the Institute of Political Science at the Eberhard Karls University of Tübingen.

Her qualification (Dr. habil.) to supervise doctoral candidates by the process of habilitation was earned in the academic field of Political Science.
She worked at the University of Göttingen for nearly a decade: She was a senior researcher in political theory and the history of ideas at the Department of Political Sciences, and before that at the Department of Medical Ethics and History of Medicine directing an interdisciplinary empirical research project.

Elisabeth Conradi started to study philosophy, German literature and educational theory at Heidelberg University and then continued and completed her studies at Frankfurt University where she earned the Master’s degree in philosophy, presenting a thesis on Immanuel Kant’s Philosophy of Right. As a visiting scholar she conducted research at the Political Science Department at the University of Chicago, Illinois, and at the Institute for Human Sciences in Vienna, Austria. Prior to that she was engaged in postgraduate studies with Karl-Otto Apel and Jürgen Habermas, as well as with guest professors Seyla Benhabib, Nancy Fraser, Judith Butler, Iris Young, and Joan Tronto. She also took courses at the Graduate School for Public and International Affairs at the University of Pittsburgh, Pennsylvania.